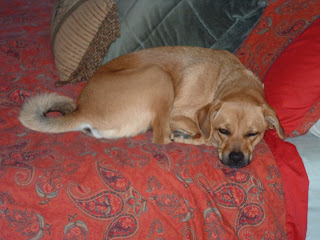 In my profile picture, there is a brown dog sitting next to me, out by the beach.  That is Daisy, our rescue dog.  We agreed to watch her over Thanksgiving weekend in 2003, when she was only 8 months old, and she has been with us ever since.  She's as loyal a canine companion as there is.

Daisy is at least 1/2 Basenji, which is an Egyptian dog with pointy ears, a pointy nose, a curly tail and no vocal cords. That's right, the only dog that can't bark.  Daisy has the curly tail, but she has floppy little ears and a little nose.

Plus, she was very shy when we got her (it appeared she had been abused), and she made no noises at all, so we thought she might have the vocal cord issue.  But no such luck.  After about 2 weeks, she started barking, and she barks like a crazy little dog every time any one in our family comes home.  Even if you've only been gone for 20 minutes - it's like you've been gone for a year.

At least we can tell she is happy to see us.