I am still not decided on what we should do about health care reform.  I have a good job, with good insurance for my family, but it was not that long ago that I was self-employed and worried that my family's insurance oculd be cancelled on a whim.  So I am happy that Congress is trying to do something.

The bills now being considered are far from perfect.  And it is hard to get excited about Nancy Pelosi's claims that the current House bill will save $30 billion from the national deficit over the next decade, when in the past year the rate of spending on bank bailouts and military campaigns has just exploded.  But we have to put our trust somewhere. 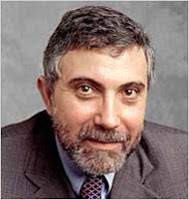 Paul Krugman, the Princeton economist, Nobel laureate, and op-ed columnist for the New York Times, wrote a good piece the other day, entiled "The Defining Moment." He begins, "O.K., folks, this is it. It’s the defining moment for health care reform."  And he concludes:

"For this is the moment of truth. The political environment is as favorable for reform as it’s likely to get. The legislation on the table isn’t perfect, but it’s as good as anyone could reasonably have expected. History is about to be made — and everyone has to decide which side they’re on."


Everything in between is well stated.  I recommend his column.  It makes a lot of sense.