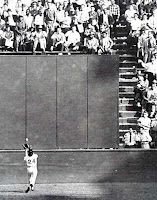 I've been a Giants fan since I got to the Bay area.  I went to Candlestick a lot when I lived in the City, and even for the few seasons that I had season tickets to the A's, I rooted for the Giants the whole time.  The 1989 Bay Bridge Series (with its ten-day break due to the earthquake) just about killed me as the A's swept the Giants in four games.

The one true Giant (out of many great ones) is Willie Mays.  I never saw him play - his career ended in 1973.  But I have had the good fortune to see him in person a number of times, at Candlestick and then AT&T Park.  In fact, a good friend of mine has a luxury box there that is just ten boxes or so from Willie's, just around the curve in left field.  Every once in a while he would be sitting there.  Amazing.

Apparently Willie has just cooperated, for the first time, with a biographer.  There is a new book coming out shortly, and there is a great story about it in the NY Times.  The story itself is very interesting, and tells me something I never knew:  when Bobby Thompson hit his home run to beat the Dodgers for the 1951 pennant, Willie Mays was on deck.