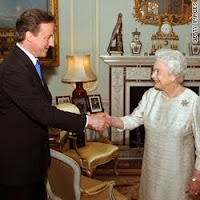 I like this report on the appointment of David Cameron as the new Prime Minister of England:


As he was traveling from Buckingham Palace to 10 Downing Street -- ashort drive -- the palace issued a statement saying: "The Queen received the Right Honourable David Cameron this evening and requested him to form a new administration. The Right Honourable David Cameron accepted Her Majesty's offer and Kissed Hands upon his appointment as Prime Minister and First Lord of the Treasury."