The Sharks announced yesterday that they won't offer a new contract to their star goalie, Evgeni Nabokov.  He's been a major part of the Sharks' success over the past several years, but he is a free agent, and apparently too expensive.  The Sharks said that the market for goalies is very deep, so while they will miss him, it's just one of those business decisions that have to be made.

Ten years with San Jose - and always working so hard: 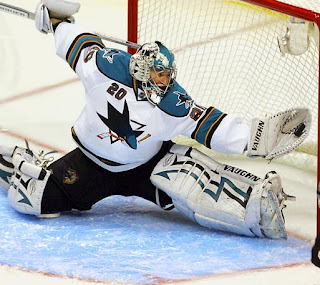