We went to a Giants game last week, the first one we had been to this year.  Before I went into the ballpark, I stopped out at McCovey Plaza, named for the great Hall-of-Famer Willie McCovey.  It's across the water from right field, a water space aptly named "McCovey Cove."

There is a great statue of Willie there: 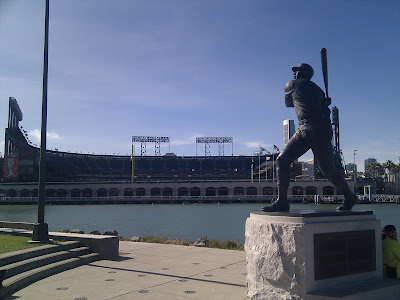 McCovey Cove, by the way, is noted for being the site of Splash Hits at AT&T Park.  These are home runs hit by a Giants player into the water on the fly.  To date, there have been 51 Splash Hits, 35 of them by Barry Bonds.  At our game, Andres Torres hit a home run into the Cove, but it bounced on its way there, so it was not a Splash Hit.

Willie McCovey never got to play at AT&T Park, or he would have hit a lot.  I've been really lucky to see him there in person a few times.

It's really nice that the second "Willie" is an honored member of the Giants' history.
Posted by jsf at 5:00 AM