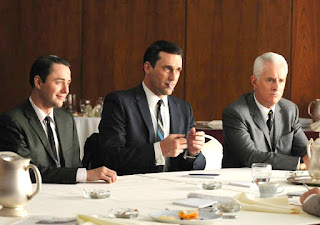 Well, the 4th season of Mad Men is about to start, and I have finally started watching.  I've now seen the first four episodes and I only have 40 more to go in order to catch up.  But the new season starts in a week, so I have a lot of catching up to do!

This is one of those shows that I kept hearing and hearing about and never managed to watch.  (Sort of like The Sopranos - the only episode I ever saw was the very last one).  But it turns out (as you probably know) that Mad Men is terrific.  The characters are fascinating, the lives they lead even more so.  Someone I know described it this way - "television as an elevated form of art."  Very well put.

I can hardly wait to see all the episodes I have coming up.
Posted by jsf at 5:00 AM