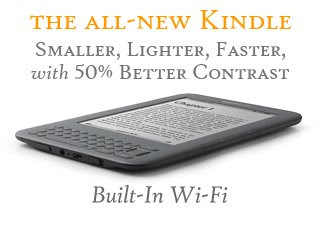 Amazon has just announced a major upgrade to its Kindle reader, while keeping the price at $189.  And it is now offering a wi-fi only version for $139.  Both are efforts to fend off competition from Barnes & Noble and Sony.

They are doing a great job on this.  The Kindle concept - carrying many books with you, with quick access to any others - is a great one, especially for travelers.


Plus, I think the wi-fi only option is a really smart idea.  There isn't much of a need to download books every second of the day via 3G; wi-fi hotspots are everywhere, and with the tiniest bit of planning, you can load a Kindle at home anyway.

But I still wonder about the value of a stand-alone Kindle.  I've had a free Kindle app on my iPod Touch for a year or two, and now I have it on my iPad.  These devices do so much more than a stand-alone Kindle, and Amazon gives me the app for free.  It even works on my computer.
When the Kindle was first reduced to $299, the Onion ran a great headline:  "iPhone Kindle app now $299 less than Kindle!"  That makes sense to me - the money for Amazon is in the selling of the books.  It shouldn't be in the device itself.  It's like razors and razor blades.
I guess the Kindle meets a certain need, but I like having it as part of a more useful device that includes my Kindle option.  And the price point of free really works.