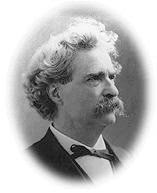 Here's a good article on one of the most well-known (supposed) quotes by Mark Twain:


"The coldest winter I ever spent was a summer in San Francisco."

The quote is widely attributed to Twain, but it appears he never said it at all.  Here's a good explanation from snopes.com:


Claim: Mark Twain once asserted "The coldest winter I ever spent was a summer in San Francisco."

Origins: San Francisco's weather patterns have confounded those who live there and those who visit for as long as there's been a San Francisco. It may be California, and it may be lovely, but the wind can be vicious, and those summertime temperatures can be disappointing bordering on "in danger of freezing if one doesn't keep moving."

Twain's droll comment is widely repeated to the point that you can't read a news story that makes mention of the cold of San Franciscan summers and not trip over it. It's a great quote. It's a wonderfully crafted quote. And it's a darned shame Twain never said it.

Searches of Twain writings, private letters, and other publications fail to locate this witticism. The closest resemblance to it appears in an 1879 letter in which Twain quoted a wag who, when asked if he'd ever seen such a cold winter, replied, "Yes, last summer." Twain then added his own comment, "I judge he spent his summer in Paris.  (Twain's rejoinder is an example of treppenwitz — the wit of the stairway, those brilliant comebacks one thinks of only long after the moment has passed.)

It's still a great line, and quite plausibly true, but apparently Mark Twain never thought it up.
Posted by jsf at 5:00 AM