A lot of sand

I've played the Straits course at Whistling Straits, in Kohler, Wisconsin, where they are playing the PGA Championship this week.  The one overwhelming aspect of the course is the sheer number of bunkers.  Most of them don't come into play, but they are very intimidating: 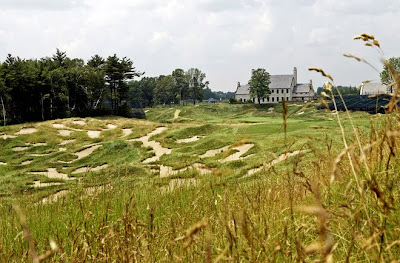 I just read a good article about the actual number of bunkers.  It says they can't really be counted, but that they number more than 1,000.  According to the story:

Read that again - 18 is the fewest number of bunkers on a single hole.

That's pretty amazing.
Posted by jsf at 5:00 AM