Ok, we've been through this before.  It's almost mid-September, and the Giants beat the Padres yesterday to move into a tie for first place in the Western Division.  18 games to go; are they going to pull it out this year?

As a reminder, the last great season was 2002, when the Giants controlled the West and then rolled through the National League to win the pennant and head into the World Series against the Angels. They lost that Series in seven games, on Oct. 27, 2002.  I remember the date pretty well because that is the day Karen and I got married.

The Giants play in such a beautiful ball park.  Here's a photo I took years ago, one of my favorites: 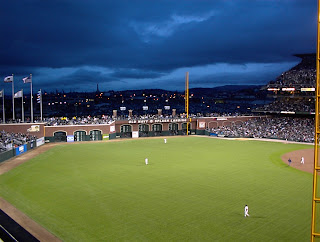 Let's hope this season they go all the way.  But first, let's get through September.  Because the last 3 games of the season, Oct. 1-3, will be played in San Francisco. And they will be against the Padres.
Posted by jsf at 5:00 AM