I've done some posts on watches I own (and there are plenty more to come).  Here is one I don't own - and probably never will: 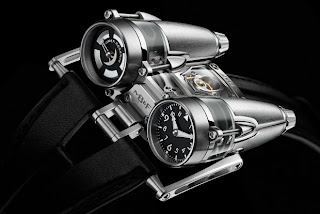 It's called the HM4 Thunderbolt, and it's not so much a watch as a "horological machine."  As explained by MB&F, the manufacturer:

Horological Machines are as much, if not more, art and sculpture as they are micro-engineering: they are machines which tell the time rather than machines to tell the time.

By designing and constructing three-dimensional machines rather than wristwatches, MB&F are able to break free of the constraints imposed by traditional horology and create kinetic art.

The watch is designed by Maximillian Busser and is a tribute to aviation, with a watch thrown in for fun.