Where did German chocolate cake come from?

One of my favorite desserts is German chocolate cake.  It doesn't get much traction at home (Karen doesn't like coconut), but I am big fan.  The combination of coconut and pecans with the chocolate just works very well together: 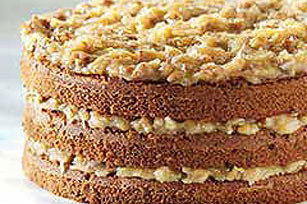 Last year I wrote about the version that Sarah made me for my birthday.  Yum!

But now, I have been surprised to learn that the cake is not from Germany at all.  (Well, maybe it's not that surprising - there are a lot of coconuts there).  It turns out the cake was made with a sweet baking chocolate from the Baker's Chocolate Company, a chocolate developed by Sam German in England in the mid-1800's.

However, in common vernacular, the name of the dessert was shortened from the possessive "German's" and it became German Chocolate Cake.  The cake remains hugely popular today (especially with me).

The original recipe, from the 1950's, can be found on the Kraft Foods website.

Just one of those interesting facts you never knew.
Posted by jsf at 5:00 AM