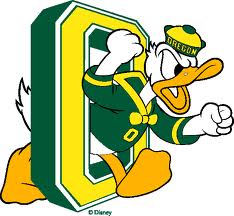 I've been watching sports a long time.  I've been a fan of many college teams, most notably the Cal Bears.  But they've managed to let me (and all their fans) down too many times.

And I have never, ever been associated with a team ranked number one in the country.  Until now.


Sam's Oregon Ducks were listed as the number one football team in the country this week.  They are 6-0, one of the few undefeated teams left, and they are averaging 53 points a game!