The passing of a great cartoonist

A few weeks ago, it turns out, Alex Anderson passed away at the age of 90.  We missed it here, despite the fact that he was from Berkeley and lived the last part of his life on the Monterey Peninsula, because the San Francisco Chronicle did not bother to mention his passing.  Which is odd, since there were detailed obituaries in the New York Times, the Washington Post, the Los Angeles Times, and a number of other major publications. 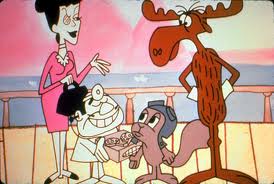 Why was Alex Anderson memorable?  Because he was the creator of Rocky and Bullwinkle and Dudley Do-Right, some of the greatest cartoons of history.  The obituaries show that his early work on these characters were lost over time and claimed by other.  But he fought back with a lawsuit in later years, which earned him the proper acknowledgment for his creativity.

The Rocky and Bullwinkle show was very funny - particularly via the two villains, Natsha Fatale and Boris Badenov.  Witness this quote from Steven Spielberg, describing the Bullwinkle show:


It was the first time that I can recall my parents watching a cartoon show over my shoulder and laughing in places I couldn’t comprehend.

When I turned 30, I was given a birthday party that included a party quiz about events that occurred in the year I was born.  One of the questions asked what was Rocky, of Rocky and Bullwinkle.  The incorrect answer - a squirrel.  The correct answer (which resulted in some arguing among the lawyers at the party) - a flying squirrel.

Dudley Do-Right, and his love interest, Nell, along with their own villain, Snidely Whiplash, were just as entertaining: 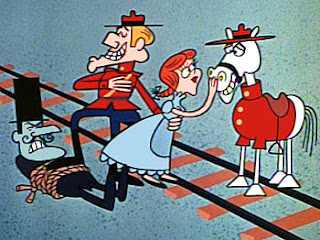 They came from an episode of Rocky and Bullwinkle, but eventually became separate characters.  I have to admit happily watching that show as a child as well.

Alex Anderson will be long remembered for bringing a lot of joy to people.
Posted by jsf at 5:00 AM