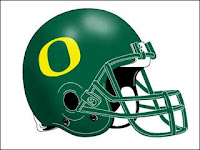 Yesterday was challenging, watching my long-suffering Golden Bears take on the No. 1 Oregon Ducks at Memorial Stadium.  The chance for Cal to knock off a top-ranked team is both rare and highly anticipated, and ordinarily Karen and I would have been crazy excited to see how close they got.  But of course we are huge Ducks fans now - Karen was even texting Sam during the game.

So Oregon holding on to win 15-13 was about as close as we could get to a double victory.  Cal held Oregon to season low scoring and rushing, but Oregon managed to save the lead (and its ranking) at the end.

Now it's on to play Arizona and Oregon State.  At least our allegiances won't be split.
Posted by jsf at 5:00 AM