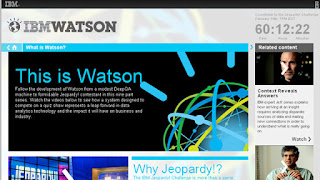 IBM has a new computer to test against humans, this time on the tv game show Jeopardy.  It's Watson computer will appear on Jeopardy for three shows in February, competing head to head against two of the most successful champions who have ever been on the show.

Jeopardy is a fascinating test for this, as the clues are tricky and require a lot of unusual thought.  I find it hard to believe a computer can even solve them, much less do it in the reflexive way needed to beat other contestants.  It  will be interesting to watch.
Posted by jsf at 5:00 AM