The Sharks played the Flyers the other night in a good game eventually won by the Sharks in a shoot-out.  But they almost lost the game in overtime.  The Flyers managed to get a shot by the Sharks' goalie as time ran out, but as you can see if you look closely, the puck was not quite across the goal line when the clock (counting in tenths of a second) ran down to 0.0: 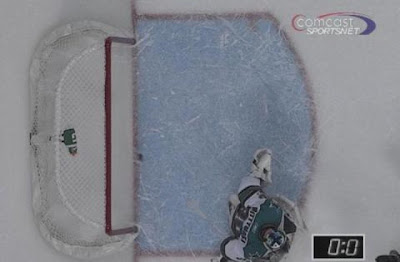 In the NHL, it doesn't matter when you shoot - the puck must completely cross the goal line before time expires.

Good for the Sharks, bad for the Flyers.
Posted by jsf at 5:00 AM