Goalie for a night

The Sharks lost one of their goalies, Antero Nittymaki, before the game against Vancouver last night.  They didn't have time to bring up a minor league player, so they signed Jordan White, a college goalie at the University of British Columbia, to a one-game amateur tryout.  White is a star goalie with UBC: 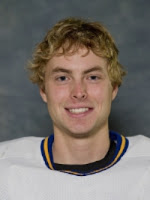 He spent the entire night on the bench, ready to back up Anti Niemi, but never had to come in, as Niemi put up a brilliant game and the Sharks won 2-1 in a shootout.

What a dream night for White, though, and he leaped onto the ice to join the celebration at the end of the game.  He may never play in the NHL, but he is going to remember that game for a very long time.
Posted by jsf at 5:00 AM