Sargent Shriver - a life of service

Sargent Shriver died yesterday at the age of 95.  He was one of the most influential people of his generation, having started the Peace Corps in 1961.  He did so at the request of his brother-in-law, John F. Kennedy, saying that JFK had told him that so many people viewed it as a likely fiasco that it would be easier to fire a relative than a friend.

Here he is at the ceremony creating the Peace Corps: 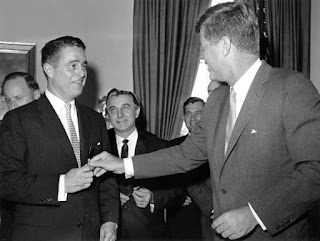 Shriver ran for vice-president on the George McGovern ticket in 1972; he also served as the U.S. ambassador to France, and he was in charge of Lyndon Johnson's war on poverty.  Shriver was married to JFK's sister Eunice for 56 years and their daughter Maria just finished serving as California's first lady.

This year marks the 50th anniversary of the Peace Corps; it was well served by Sargent Shriver and he will be long remembered for his leading role in bringing it to fruition.
Posted by jsf at 5:00 AM